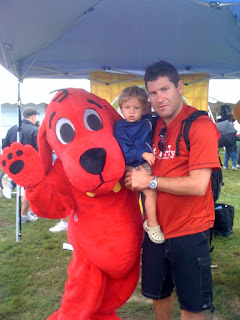 After my little bike ride today, I met up with Rachel and Jackson down on the Mall at the National Book Festival. This annual event always brings in outstanding guest authors, and this year was no exception.

But none of the New York Times best-sellers could compete with Elmo. Jackson is at that age where he is completely obsessed with the arguably annoying red monster from Sesame Street. There is something genius about Elmo, which I never realized until I had a kid. Jackson will often say, "Elmo Elmo Elmo" in a cult-follower-like fashion.

Today, he met the real Elmo, being played by Kevin Clash, who plays him on the Street, and watched him sing several classic tunes.

I missed this portion of the afternoon, but got there in time to see Jackson meet some of his other favorites, including Curious George and Clifford the Big Red Dog (pictured).

Tonight, Jackson was kind of sad before bedtime because he remembered Elmo leaving. Rachel had told him he left with his "dad" (Kevin Clash) because he had to be on TV tomorrow. Jackson kept saying, "Daddy Elmo" to her.

It was also great to see a reading by Mo Willems. His "pigeon" books, like Don't Let the Pigeon Drive the Bus, are some of my favorites.
Posted by Pop Culture Lunch Box at 12:55 AM