The Raspberries Could Never "Go All the Way" 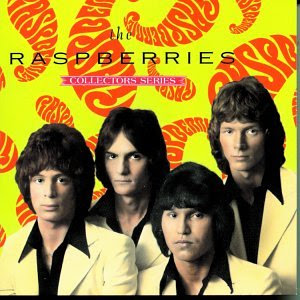 John Lennon, Keith Moon, and Kurt Cobain were all big fans. But why did The Raspberries never sustain a big career? And how have they still not really gotten their due as forefathers of Big Star, Wings, Superchunk, and Promise Ring-like power pop?

That is the question veteran rock journalist Greg Prato attempts to answer in his essay on the band, which appears in his new anthology of articles, called No Schlock ... Just Rock!, that have appeared throughout the years in fan mags like Classic Rock, Guitarist, and Record Collector.

"Few songs from the early 70s summarized the 'power pop' style as splendidly as 'Go All the Way.' Three-and-a-half minutes of pure pop bliss, the song merged the best bits of early Beatles and The Who," Prato writes.

He goes on to list all the possible reasons for the lack of interest in the band behind that truly great tune, including:

-- The song and title itself were "too dirty."

-- The band was from the nowhereland (at least in sunny power pop terms) of Cleveland.

-- Well-crafted pop songs were leaving the radio during this period in favor of the "self-indulgent stuff" like Traffic and Cream.

-- The song was too much of a "concept," starting like The Who's "Won't Get Fooled Again," hitting the verse like The Beach Boys' "Don't Worry Baby" with Paul McCartney on vocals, sounding like The Left Banke on the chorus, and ending again with The Who.

-- Speaking of managers, "the group was handled by a revolving door of shady" ones.

-- Capitol Records organized a series of interviews for the band, and one was for 16 Magazine, which positioned them as teeny-boppers, an unsavory predicament to all of their 17-and-older fans whose little sisters now liked them so much.

The Raspberries split in 1975, but much of their music is well preserved on the excellent greatest hits collections. "Go All the Way" also appeared in the rock movie Almost Famous.

Prato's a good journalist. In each essay, he asks one probing question and tries to dig into it, rather than attempting to cover each subject's career trajectory. I'm looking forward to enjoying his essays on Rush, Cheap Trick, Steely Dan, Ratt, The Beatles, Kiss, Judas Priest, Def Leppard, Meat Puppets, Bad Brains, The Cars, Mudhoney, Radio Birdman, Sonic Youth, and dozens others, along with his full-length T. Rex biography.
Posted by Pop Culture Lunch Box at 1:56 PM