Rockin' in Love at the Theme Park Adventureland 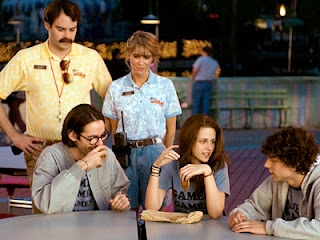 Adventureland is one of the top indie comedies I've seen recently. It's directed in the Wet Hot American Summer style by the same person who directed Superbad and scores especially high marks from me for its tremendous soundtrack. The Cure, Lou Reed, and The Replacements are each used strongly, as are Whitesnake and Judas Priest.

While SNL stars Bill Hader and Kristen Wiig surprisingly have the weakest and least funny roles, Jesse Eisenberg (who was excellent in The Squid and the Whale) and Kristen Stewart are "cool and cute" as a couple with adolescent troubles at a theme park in 1987. Ryan Reynolds is also good as the bad-boy mechanic at the park who uses stories about once playing music with Lou Reed as a way to seduce a new crop of girls each summer.

And of all the Pittsburgh-based movies I've seen recently (for some reason), this one makes by far the best use of a Steelers' reference when a guy wearing a Jack Lambert jersey plays a game in the background.