Anchoring Down in Angkor Wat 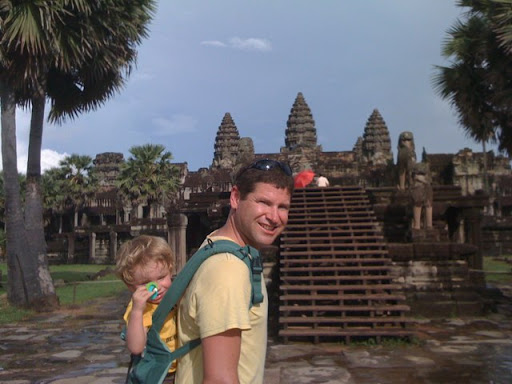 We left our hotel in Luang Prabang Thursday morning and embarked on our second excellent flight on lowly-regarded Lao Airlines. After a 15-minute pitstop landing in Savannakhet, we got to Siem Reap, which is the city in Cambodia that serves as the tourist hub of Angkor Wat.

Even though we arrived in the heat of the afternoon (and I mean H-E-A-T), we went straight to Angkor Wat, which is actually the name of only the biggest temple in a complex of hundreds of temples. The main temple is considered the largest religious structure ever built. Jackson competed for the attention of the throngs of late-afternoon tourists, as many asked us if they could take his photo. He said "cheese" easily 100 times.

We then went into town for the evening and ate Khmer cuisine at a delicious vegetarian restaurant. Siem Reap is much more upscale and urban than we had pictured after living a relatively rural life for the past week in Laos. There were many sights to behold, including a tremendously varied night market, people getting the dry skin bit off their feet by little fish in a big tank, and a musical serenade by a band of landmine victims. Jackson melted down at dinner after a merciless day of heat, so we wrapped the remainer of our curry and French bread with peanut sauce for our hotel room, the lovely Nida Villa, across the street from the decadent Grand Hotel. Rachel said the many hotels remind her of Vegas.

Only here, we have the added benefit of monkeys running in the streets.

Posted by Pop Culture Lunch Box at 7:02 AM