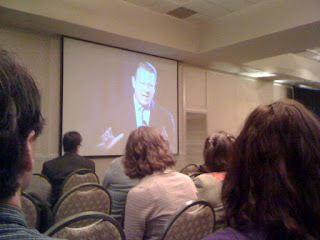 Former Vice President Al Gore was optimistic about upcoming climate negotiations during his keynote speech this morning to the 700 or so attendees at the Society of Environmental Journalists in Madison, Wisconsin.

He said no public announcement has been made, but that he's certain U.S. President Barrack Obama will not only go to Copenhagen, but will also take a Congress-passed bill with him. The most important thing for reducing emissions through an international treaty is that there is a price placed on carbon for the first time ever. Gore admitted that an international agreement is likely to be weaker than necessary, but will still usher in a promising first step.

Before a Q-and-A session that featured one contentious journalist asking about the errors in Gore's documentary and repeating that the polar bear population is growing, Andrew Revkin of the New York Times pressed Gore on whether this December's United Nations climate talks in Copenhagen will matter.

Gore responded that the potential for change can build up until it reaches a critical mass capable of breaking through past barriers. He thinks the world is extremely close to the tipping point. He cited recent high-profile defections from the U.S. Chamber of Commerce and the National Association of Manufacturers. Business leaders are looking at the science and are slowly and steadily beginning to ask questions about how they can be part of the solutions. And corporate advertising campaigns are sending messages about how they are trying to help.
Posted by Pop Culture Lunch Box at 10:09 AM