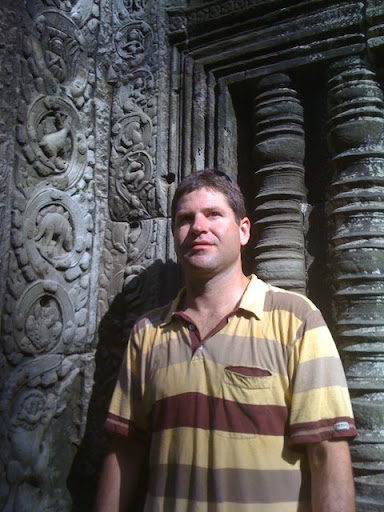 We fit in one last brief visit to Angkor Wat on Saturday morning before our flights from Siem Reap to Bangkok and Bangkok to Krabi, Thailand.

Ta Prohm was our first stop, the wat known as the setting of Indiana Jones and the Temple of Doom. It's also known as the one with the massive trees whose roots coil all around the bases of the sprawling stone structures. This is a major wonder of early civilization and a testament to how strong people must have been back then. They were also knowledgeable. It was amazing that a dinosaur was drawn on at least one of the walls. How did they know about the dinosaurs?

We also visited Bayon, a massive temple, but by then the busloads of tourists were swarming the area and Jackson was ready for a nap via a few minutes of Baby Einstein (the portable DVD player has been a life-saver).

We left Angkor Wat by 10 a.m. (whether you have kids or not, be sure to get an early start at Angkor Wat, the heat of the day is almost unimaginable by U.S. standards) but not before spending a few quality minutes feeding a family of little baboon-like monkeys some bananas.

When we landed in Krabi, it was already dark. We went the opposite direction of all the beach-bound travelers. In pitch darkness, our driver Kwon took us into the mountains to Phenom, our eco-resort and home for the next two days. We had a dinner of pad thai, prawn fritters, fried rice balls, and beers with the resort's British owners Jules and Barbara.

We had no idea whether the place was nice, being nighttime, but it seemed a little sketchy as we feel asleep in a hot bungaloo with no sheets on the bed and covered only by a mosquito net.
Posted by Pop Culture Lunch Box at 2:55 AM