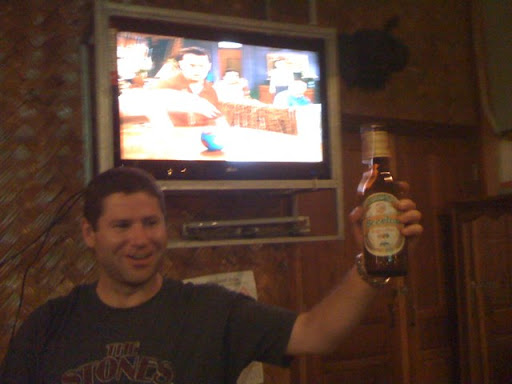 Tiny outpost Vang Viene, halfway between Vienchian and Luang Prabang, is a hotbed of Western pop culture, for no reason other than ... wait for it ...

Many of the 40 or so bars have episodes of the TV show Friends on a constant loop. Ex-pats lounge in these bars, which of course serve an abundance of large bottles of Beerlao. You can also usually find the soccer game you're looking for in these hotspots, also known as a hangout for many of the town's backpacking opium heads. We had a fun conversation with a couple of these drugged-out soccer hooligans. They were from Scotland and Wales and were nice enough, if a little unbalanced, as they regaled us with tales of their day floating in tubes down the Song River and bruising hemselves badly in inappropriate diving attempts.

Nobody seemed to know the origin of the town's Friends obsession, but apparently lots of visitors love to sit for hours (if not days) watching the show from the "axe cushions" while drinking shakes laced with pot, mushrooms, opium, and/or meth.

I wonder if Rachel, Ross and the others have been here?
Posted by Pop Culture Lunch Box at 10:02 AM