Lazy Days Towards the End of Our Asia Trek 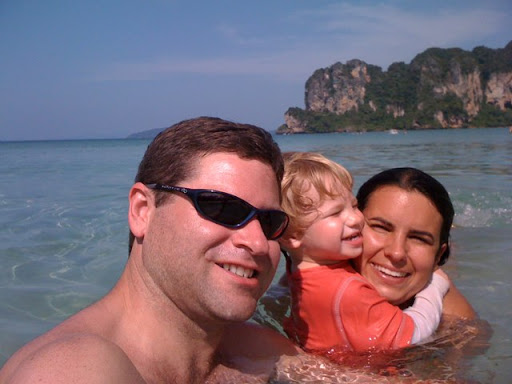 Rain has halted some our our outlandish amounts of fun over the past two days here in, yes I'm using the word again, paradise.

But there have been some momentary breaks in the weather and some activity highlights.

Rachel got to climb on some world-class rockfaces on Wednesday morning. She was psyched. Jackson, on the other hand, was none too happy when I took him around the cove to find his mommy dangling precariously off some stalagtites. He broke into his worst and really only tantrum of the trip. I had to carry him back across the peninsula writhing in my arms and screaming, red-faced, "Mommy rock climbing" again and again.

Things lightened up when we went to dinner. After eating most meals at our resort, we discovered the funky side of Railay Bay and ate scrumptious BBQ tuna and red snapper, as well as salads with peanut sauce and naan breads. This was in the backpacker area that the fancy resort people on our side probably figure their clientele don't want to associate with. But it was much more in
line wih mine and Rachel's style.

We somewhat pathetically passed out by 10 p.m., but we much less pathetically woke back up again at midnight to watch Leonardo DiCaprio in The Beach, which we rented at the front desk and which I had just finished reading in novel format earlier the same day. As "Anonymous" commented about my recent post on the book, the movie probably isn't as good as the novel. But I thought the producers jammed as much as they could into the 90 minutes they had to work with pretty effectively. And Leo was stupendous as usual.

Nothin' much happened on Thursday, other than sitting by the pool, swimming in the ocean, and getting more massages.

On Friday, we'll have time to hike to and explore a nearby cave before catching our flight to Bangkok, where we'll spend two sure-to-be chaotic and wild days.
Posted by Pop Culture Lunch Box at 6:33 AM