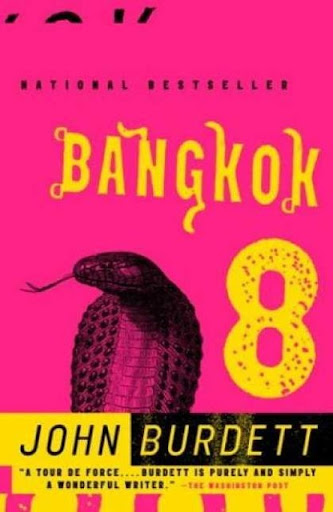 An African American marine is driving away from the Bangkok airport when the cobras someone has left in his gray Mercedes bite him in swarms.

A man with a shaved head and shaved eyebrows named Pichai, the narrator's "soul brother and partner in insolence," finds the marine dead and also is attacked and killed.

This is how Bangkok 8, the first book in a popular detective series set in Thailand, begins. Novelist John Burdett goes on to describe how many Americans, including tough-guy marines, are scared of snakes. The Vietcong often used them as weapons in tunnels during the Vietnam War. And for good reason, the small python has wrapped itself around the black marine's shoulders and neck and is trying to swallow his entire dead head. When Pichai tries to help, the python leaps to attach itself to his left eye. The narrator tries to shoot the snake but only then does he and the growing crowd of onlookers realize that dozens more snakes are now pouring out the car door. By the end of this horrid opening scene, the narrator has shot all the snakes before they can harm anyone else.

Apparently the narrator and Pichai have previously murdered a "yaa baa dealer" and escaped to a forest monastery where they meditated for six months before being assigned by the abbot "to mend their karma" by becoming cops under his brother's charge in Bangkok's District 8.

I may come back to this book at a later date, probably when I begin to miss Thailand in a few weeks when I'm back at home in the U.S.
Posted by Pop Culture Lunch Box at 4:50 AM