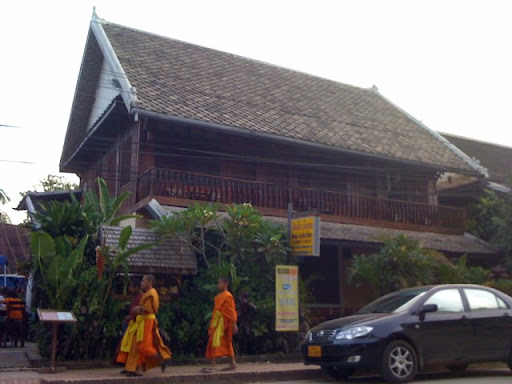 Pictured is the place we stayed last night (Sunday) upon our arrival to Luang Prabang, which is our homebase for the next four nights.

TripAdvisor.com called it the third-best guest house in town. But it was right on the main thoroughfare leading into the city center and anyone driving past could easily hear any of Jackson's louder sentences. Who knows what the other guests could hear. As for what Rachel and I could hear? How about motorbikes, drunk English-speaking people, and roosters.

This was all after a dramatic but zook-inducing minivan ride from Vang Vieng. The first five hours were scenic, and it was fascinating to see how the people's lifestyles and wealth levels changed as we got further away from the more urban south of the country. Jackson gave one of our Sesame Street books to a group of children and one kid flipped through a couple of pages before excitedly running away with it behind the road-side huts. But the last hour was extremely difficult on the stomach as we wound down precarious mountain roads back towards flatter lands.

The sickly end of the ride, combined with the sounds and fishy smells of Muonglao Guest House, made for a relatively unpleasant start to the highly-anticipated Luang Prabang. Luckily for me, I decided to check on the off-chance that American football might be live on the tube at 4 a.m. To my delight, there was a game being played in the snow between New England and Tennessee. I stayed up and watched the last three quarters, as the Pats won 59-0 and the voices of the CBS announcers merged with those of the Asia Sports Network ones. Pretty weird, but it was cool to get all the Fantasy Football updates as well!

Rachel and Jackson were pretty-much up this whole time also, and by 7 a.m. we could take no more and hailed the tuk-tuk driver sitting in front of the building (he no doubt knew there were often unhappy travelers who would want to move every morning) to take us to a great place we spotted earlier called Villa Champa, in a better part of town, with wi-fi, and only $40 per night.

How TripAdvisor.com ranked Muonglao the third-best guest house in Luang Prabang is amazing. There must be more than 100 guest houses here, and probably 90 are better!
Posted by Pop Culture Lunch Box at 3:09 AM