Up the River in Up the Yangtze 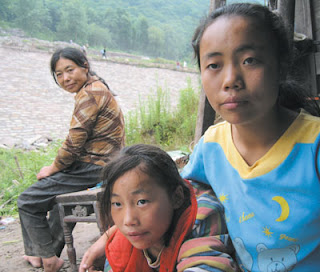 This documentary from China creeps along a little painfully at times. However, the shy teenage girl from an extraordinarily poor family is impossible not to cheer for as she leaves home and has life training aboard a Yangtze River cruise ship.

The cinematography in Up the Yangtze is wonderful and captures a world that too few Americans know or care about. The poor girl's illiterate family is about to lose the family shack due to the imminent flooding of the Yangtze River plains. Her coming-of-age story is touching, as is that of the richer 19-year-old boy who sings for the cruise passengers. His good looks and charm end up giving him a problematic ego.

This is a great topic and, in some ways, an important story to be told. Unfortunately, it could have been told in about 45 minutes rather than 90.

Now. I'm going to cancel my Netflix account for awhile and go back to the Blockbuster style of walking to pick up movies when necessary. I've had my last two NFlix rentals since early September!