The Chaotic Beauty of a Trail-Blazing Music Critic 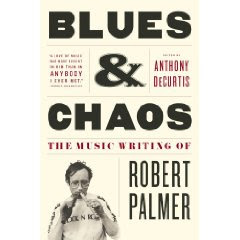 When music critic Robert Palmer (not the singer Robert Palmer, of "Sneaking Sally Through the Alley" and "Addicted to Love" fame) asked Jerry Lee Lewis why he thought playing rock n' roll would damn him to hell, the piano fireballer responded, "I can't picture Jesus Christ doin' a whole lotta shakin'."

In his 1985 review of Madonna's first tour, Palmer noted that she was "backed by a competent but rather ordinary touring band and she simply didn't sing very well. Her intonation was atrocious; she sang sharp and she sang flat, and the combination of her unsure pitch and thin, quavery vocal timbre made the held notes at the end of her phrases sound like they were crawling off somewhere to die. This woman needs to see a good vocal coach before she attempts another tour. And one hopes that the next time she performs [at Radio City Music Hall], she will have learned not to toss tambourines into the air unless she's going to be able to catch them."

Palmer was an ardent supporter of punk, but in 1978 he disdained the Ramones as "a one-joke band. The Ramones do not project passion, they play dumb in order to look cool. And they have circumscribed their music to such an extent that the only thing it effectively satirizes is itself. They are the kind of joke one tires of very rapidly."

These are the kinds of fascinating nuggets sprinkled throughout the early pages of Blues & Chaos: The Music Writing of Robert Palmer. It collects Palmer's writings as the New York Times' first-ever music critic, as the editor of the record-review section in Rolling Stone, and from the many books he wrote. It's a book well worth skimming.

By an obituary writer in the Boston Globe when Palmer died in 1997: "I was so charmed by his writing, his knowledge, and his obvious love for the music that I treated [his book Deep Blues] as a Bible, reading each chapter and then buying every record it mentioned."

I can't imagine a better compliment for a music critic.
Posted by Pop Culture Lunch Box at 11:38 AM