How Not to Get to Sesame Street 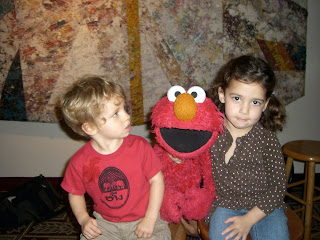 Lisa, Lucy, Meredith, Jack, Mike, Julia, Rachel, Jackson and I witnessed what must have been the most poorly organized Sesame Street-related event ever today at the George Washington University Lisner Auditorium.

The moment captured in photo to the left was the definite highlight. That's the REAL ELMO and, as you can see, Julia was on her best behavior and Jackson couldn't believe he was sitting that close to his hero.

Otherwise, this was a 40th-anniversary "party" aimed at adults but marketed for kids. So while the MC lady repeated told the kids to be quiet (a silly and impossible task) and even suggested that parents take any rowdy children outside for a break, everyone suffered through a program in which the puppeteers of Elmo, Abby Cadabby, Zoe, Prairie Dawn and the real-person Maria talked about how they became involved with Sesame Street (although the soundman never turned up the mics loud enough for anyone to hear anything) and audience members asked a never-ending litany of inane questions that could have been answered on the Web in two seconds.

By the time we got around to singing a couple of songs from the show, everyone was pretty fed up and had lost the energy and initiative to join in. By the time they confusingly announced that we should get in separate lines for book signings and pictures with the puppets (in what appeared to be a downstairs bathroom area), I bailed on the crew in time to walk to Georgetown to catch the second half of the Steelers-Bengals game at 51st State Tavern. My Steelers lost 18-12.