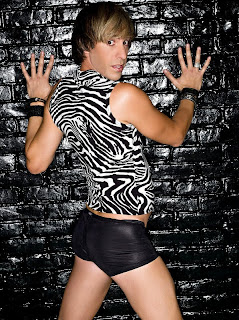 When Borat came in on my recent list as the 10th funniest movie ever, it did so with a heaping helping of shocking offensiveness. Just the fact that Sacha Baron Cohen has created an equally classic work of art with Bruno is cause for celebration. I don't know if this largely-panned movie is better than Borat, but it's darn close.

Considering that one of the first movies my dad took me to (behind my mom's back) was Blazing Saddles, I figured it would be OK for my 2-year-old Jackson to watch a bit of Bruno. Bad idea. (We've come a long way since the late 1970s, and this makes Mel Brooks look like Elmo.) No more than three minutes into the film, Bruno's penis was being sucked into a clear Dustbuster. Jackson's eyes were quickly covered and he was whisked off to bed.

That was just the tip of the iceberg. In the movie, Bruno's sassiness is contagious. Each time you start to moan about how tasteless many scenes are, there comes a twist in which you can't stop crying-laughing for minutes on end.

Just watch it. And leave your ability to be offended by Bruno far, far away.