Eating the Dinosaur: The Interview As Conversation

This is the first part in a series about Chuck Klosterman's new book Eating the Dinosaur.

When speaking to people, Klosterman prefers to interview them rather than talk to them "for real." He doesn't like the social limitations that tact puts upon real conversations, and he also doesn't like talking to most people more than once or twice in his lifetime. 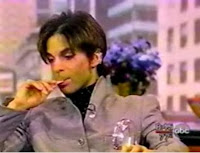 Examining the odd phenomenon of the "interview," Klosterman recounts the singer Prince's behavior through much of the 1980s, when he declined almost every interview request he received. When he did allow an interview, he would demand that the reporter not use a tape recorder or write notes. Prince did this not because he was crazy but rather because he wanted the writer "to reflect only the sense of the conversation," as opposed to the specific phrasing he used.

Interesting. I often feel like I'm interviewing people when we're talking. I think it comes from actually interviewing people as a major part of my newspaper and PR jobs over the years. Sometimes I feel a little guilty about this, but I'm not sure why. The interviewing technique is a good way to get to know people and it keeps conversations with strangers from becoming awkward and filled with silences.
Posted by Pop Culture Lunch Box at 1:15 AM