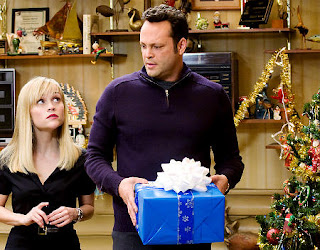 Now, I'm a guy who likes a good chick flick fairly often. But Four Christmases goes beyond my capacity to enjoy the feel-good family holiday cutefest.

Whoever conceptualized this turkey made some big mistakes. Not that they didn't perhaps have a seed of a good idea at first. I can't remember much of the movie (it was sooo bad), but it had something to do with a couple that finds their Caribbean vacation canceled and is forced to spend the holidays with their four parents and their extended families.

Seems like this could work, at least slightly, once the usually reliable leads Vince Vaughn and Reese Witherspoon were cast. But they may both have a difficult time recovering from this mess. A particularly porous scene is the one in which they pack their bags with sickening joy. I know it's the movies, but anybody having this much fun packing luggage is not a joy to watch.

Sorry I've wasted this much time recapping this horrible experience (which, notably and embarrassingly, has grossed about $80 million since its Thanksgiving release).