Pixies Cash In With Great Performance 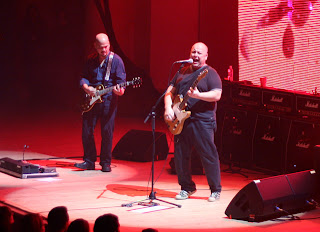 The Pixies may just be getting better with age, if that's possible for a grizzled corps of indie-rock uber-vets. The band was much better last night at DAR Constitution Hall in D.C. than they were during their first reunion tour in 2004 (I saw them then in New York City).

Why would anyone bother arguing with the old money-making scheme of playing a classic album in its entirety when that album is Doolittle? An argument could be made that this is one of the 10 greatest albums of all-time. 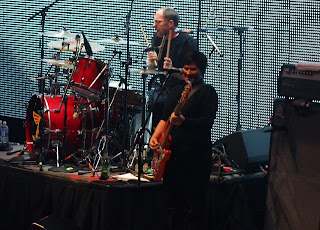 Kim Deal was in fine form, smiling like a happy kid as she wound her wrist-gripping bass lines all over David Lovering's non-stop cracking, pumping drumming. She did the majority of speaking for the band (which wasn't much), regularly keeping the audience abreast of exactly where they were in the chronological progression of the album. Lovering also offered an evening highlight with the band's love song "La La Love You."

Joey Santiago was masterful on guitar, and Frank Black is timeless, yelping, screeching, yelling, and beautifully singing effortlessly throughout the nearly 90-minute set.

Among the many highlights that I witnessed with rachel, Stu, and Arohi were "Hey," "Crackity Jones," "Debaser," both the slow and fast versions of "Wave of Mutilation," "Here Comes Your Man," Monkey Gone to Heaven," "Gigantic," and "Where Is My Mind?" Even the b-sides from the Doolittle era kept the momentum pumping throughout.

It's worth noting that the soundperson was incredible. Every element of the music was so well separated, and very loud and clear. This was a relief because sound has been an issue at past shows I've seen at Constitution Hall, including R.E.M., Modest Mouse (particularly awful sound), and Ryan Adams and the Cardinals. The sound, it should be noted, was also excellent for indie-rockers-by-way-of-Rush Mew.

The Pixies may just be in the reunion game for the money (a charge that seems to continue being leveled in various media I've seen), but if this is what selling out is about, sign me up for Team Capitalist.