The working hours got longer as the latter half of Week One came to a close here at the UN climate conference in Copenhagen, but the action was clearly heating up. 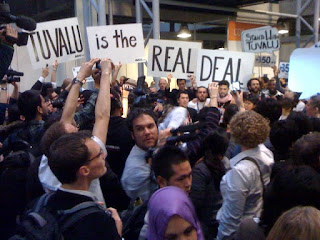 I've had my nose in a barely-functioning rental laptop PC from my workplace, the World Resources Institute (I always kick myself when I don't bring my Mac on these kinds of work trips), when the protesters (pictured) barged into my space at the Bella Center. They chanted "Tuvalu. Listen to the islands" and demanded to be let in to speak to negotiators in one of the nearby mammoth UN assembly halls. The fuzz was quickly on the scene kicking the protesters and yours truly out of the area.

It's truly been madness. Because it's more difficult than ever to corral journalists with heightened security in front of the media center, I've resigned to do less of the schmoozing with reporters that I had planned and try to push more materials out to them through phone calls, press statements, press releases, and other correspondence. Very different from the annual climate conferences I attended in Montreal and Nairobi, where it was easy to walk through the press areas and line up interviews. 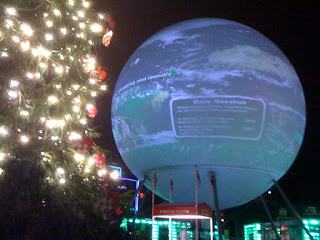 I got a chance to see a little bit of the cities of Malmo, Sweden (where it's cheaper and where my hotel is located) and Copenhagen in the late afternoon on a couple of days. I took a train from the Bella Center to the Copenhagen Central Station before proceeding to get lost looking for our office space at a place called the Vartov Center. At least that lostness kept me away from my faulty laptop for a while and I got to see the big "Hopenhagen" globe (pictured) next to the Tivoli Gardens, a famed amusement park where people were dropping and swinging and gliding on scary rides high above the city in below-freezing temperatures. Uh, no thanks.

I also ate some alright Thai food at a place that would accept none of my credit cards, but I escaped by way of paying with Swedish kronas instead of Dutch kronas. I ate a gnarly cheeseburger (with an incredibly drunk guy who grunted frequent noises my way and dropped most of his mega burger on the floor, each time accompanied by a large splat) and a debatably-contaminated Mediterranean thingy, mainly because it's always late when I'm done working and I have to eat SOMETHING.

Not to mention that this whole place disorients me quite a bit. I never feel as lost in places like Brazil, Africa and Asia as I have here. Maybe it's because of the cold and because they seem rude, even though every time I get into a conversation they're eagerly nice (except for the hamburger guy).

I'll tell you about my weekend bike ride to the hippy commune next. For now, it's already too late and next week starts in about 5 hours.
Posted by Pop Culture Lunch Box at 9:05 AM