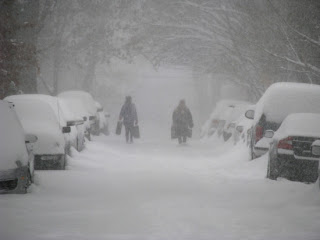 This picture to the right is the "Snowpocalypse" that's keeping me from getting home to D.C. after two weeks in Sweden/Denmark.

The good news: I made it to Amsterdam! United is putting me up for the night in a fairly swanky Sheridan that is a 3-minute walk from the United ticketing desk and a 5-minute walk to the train, which is a 15-minute ride to downtown (American city planners take note; in the U.S., I would have had to take at least one shuttle to the nearest airport hotel).

The bad news: My kinda luck today. After waiting for four hours at the airport for someone to finally give me a hotel room, I then spent another two-and-a-half hours sitting on a train that was going nowhere while somebody tryed to commit suicide on the tracks between the airport and downtown. I finally gave up after a disgusting Dutch airport burger and went back to my hotel room.

It's pretty late on Saturday night, but I have nothing better to do, so I think I'll try again to check if the trains are going downtown. I really want to walk around the Red Light District and see Ann Frank's house.

And what with United apparently canceling 500 flights today, of which most of those were headed to D.C. airports, I'm not really counting much on getting back home anytime this weekend. The upshot of that would be that I would get to see Amsterdam in the daytime and have more than an hour or two to explore. The down side being, I really am ready to be home for a change. They told me to come back to the airport at 9 a.m. tomorrow to get on an 11 o'clock flight. We'll see how that goes ...
Posted by Pop Culture Lunch Box at 9:05 AM