Travels in Sweden and My Impending Darkness 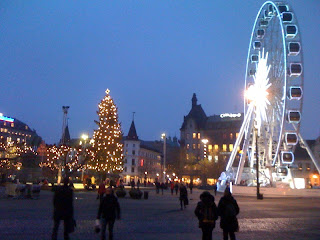 Well, here it is Wednesday night and I'm just now posting my first travel entry about my trip to Copenhagen for the much-ballyhooed United Nations climate conference. I arrived from a red-eye flight Sunday night and have had jetlag and lack of sleep from working very hard to save the planet, so forgive me for not keeping you all updated. I'll try to do better for my remaining 10 days here.

Although it's always cool being in new places, I have to admit there hasn't been much to see so far. This has to do with the above mention of working too hard (always indoors) and the fact that I saw no sunlight from the time I left D.C. at 5 p.m. Sunday until around 2 p.m. Tuesday, when I ventured out of the conference's Bella Center to take the metro to a phone store to get more minutes on my travel phone. And even then it was pretty dark.

This conference is certainly exciting. Reports from registration officials are that 15,000 people are registered (about three times the usual for these annual meetings, in which country officials try to bang out an international climate agreement to succeed the less-than-optimal Kyoto Protocol), but that 37,000 will try to get in.

My proudest moment came on Monday evening. After waiting in line to register for nearly two hours, the police announced that registration was closed for the day. I hung around for a bit, but it was looking pretty useless, so I went to a nearby bathroom. After that, I took one last peek at the line before getting on the train. There were still a few people waiting and they were moving in through the gate quickly. I ran to try and join them and was stopped by a policewoman who was hearing none of my pleas. I saw a policeman who I had spoken with earlier and told him I HAD to set up for a press briefing in the morning. Thus, I became the very last, and I mean dead last, person to be allowed into the venue on opening day. Don't think of myself as a sweet-talker, but I guess I have a little touch. 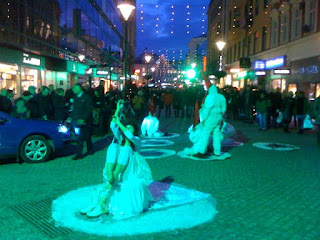 These first couple of days have been like this: truly feeling helpless. I brought only half of my Europe power adapter, so my iPhone had no juice and my computer had no battery. My local phone was the only thing that worked, so at least the endless string of journalists trying to reach me had some way to do so. On top of all this, the Copenhagen hotels sold out all their rooms long ago, so we are staying about an hour away in Malmo, Sweden, which means a train ride then a metro ride every morning to get to the Bella Center for our 8 a.m. staff meeting.

It may not be Copenhagen (which I have yet to explore), but Malmo is cute, as you can see from the photos here. One is the Ferris wheel in one of the town squares around the corner from our Best Western (World Resources Institute has 30 staffers staying here and five lucky people staying in Copenhagen). The other is one of some weird interpretive dancers in the street and looking kind of like witches and KKK members (they probably had some perfectly reasonable explanation, I hope).

My last complaint will be that our hotel has no gym. Watching the multitude of bikers and streets virtually empty of motor-vehicle traffic only adds salt to the wound of my lack of exercise.

OK, I'll stop being negative now. This is bound to get better. Stay tuned ...
Posted by Pop Culture Lunch Box at 9:01 AM