Drag Me to Hell Scares Us Into the Next Decade 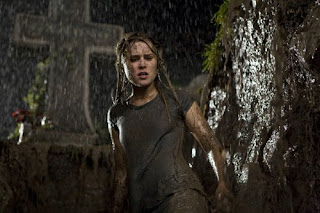 The 2000s didn't have an over-abundance of great horror movies. But there were some notables, including Jeepers Creepers, Wrong Turn, 28 Days Later, Shaun of the Dead, The Eye, Saw, Hostel, The Ring, Wolf Creek, The Devil's Rejects, and The Hills Have Eyes (see a solid all-time top 100 list of horror flicks here).

Drag Me to Hell rounded out the decade nicely at the end of last year. This movie is very scary. My heart is still racing 30 minutes after it ended. And that's no surprise, since it was directed by Sam Raimi, of such classics as Evil Dead II, Army of Darkness, and Spider-Man.

Alison Lohman plays Christine Brown, a loan officer who "shames" an old gypsy woman losing the mortgage on her house. The woman is downright nasty about this situation. She stalks and attacks Christine several times early in the film. Lohman does a good job of alternating between strong career woman and vulnerable former farm girl. She reminds me of a poor-man's Naomi Watts, with a Drew Barrymore voice, and may have a promising future.

Her boyfriend is played well by Justin Long, quickly becoming a veteran of the horror genre after his fantastic turns in Jeepers Creepers 1 and 2 (not to mention a lengthy resume in top-notch comedy films).

The old-woman scenes carry the first half of the movie, and a terrifying exorcism as well as the train-station scene offer enough twists to keep the pace up for the second half.

Here's to hoping Drag Me to Hell is a sign of good (or at least evil) things to come in the 2010s.