Federer and Nadal and the "Greatest Tennis Match Ever Played" 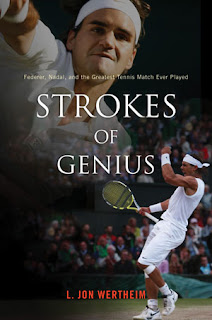 As Roger Federer and Rafael Nadal awaited their third straight Wimbledon final, they sat together (but apart) in the locker room while it rained outside. L. Jon Wertheim watched them and wrote a book, Strokes of Genius: Federer, Nadal, and the Greatest Match Ever Played, about this legendary 2008 match.

At this point, "their differences were glaringly apparent. Federer radiated calm. He sat on the bench smiling and cracking cocktail-party jokes." He drank a Pepsi and ate pasta primavera about two hours before the match was to begin. Now, at what was supposed to be match time, "he munched one of his beloved Kit Kat chocolate bars" that the locker-room attendants had stocked at his request.

Nadal, on the other hand, stretched, paced, and "fiddled with the tight bands of tape below his knees, worn to prevent the patellar tendinitis that had bothered him in the past." He rifled through his rackets over and over and ritualistically "lowered and raised his socks until they were precisely the same height."

Once they were finally called to the court, with the rain stopped, Nadal sat in his courtside chair and sipped from each of his two bottles of water, arranging the bottles so their labels would face towards the side of the court he would occupy. Meanwhile, Federer waited for him to get on the court for some warmup time. Federer's girlfriend (now wife), Mirka Vavrinec, watched Nadal "and muttered, 'Oh, come on.'"

In the weeks leading up to this match, Federer was almost never seen unless his was on the court, while Nadal could be spotted walking to the courts from his rental, shopping at Tesco, and lingering after his matches at the All England Club.

The differences in these two players help make this a great read. It may not be a Borg/McEnroe/Conners-type tale, but it's about as good as tennis legends get these days.
Posted by Pop Culture Lunch Box at 9:45 PM