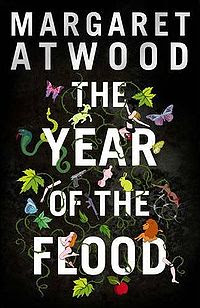 I love a good apocalypse novel, but from reading the first few dozen pages of Margaret Atwood's new The Year of the Flood, this doesn't make the grade.

Toby is the young girl protagonist who watches out from her building at an abandoned wasteland years after some sort of flood has removed most of the humans from earth (although the animals and plants seem to have done alright). She dreams of other kids she once knew and wonders if she is the only person left on the planet. Apparently, for a time, she worked at a "SeksMart," although I'm not sure if this was before or after the "flood." Actually, I'm not sure if she was a prostitute, a trapeze artist, or a worker at a human-meat burger joint. She could shoot a rifle though, and nails a boar when it encroaches on her garden.

The Year of the Flood seems to be written in a style that captures the current moment of intense environmentalism that society is caught up in, but it's awfully slow and meandering from the start. Apparently, it later details an eco-cult called God's Gardeners, but I didn't have the patience to read on. And, unfortunately, just because Atwood, a member of the Green Party of Canada, has written some good sci-fi over the years (the Arthur C. Clarke sci-fi award winner The Handmaid's Tale) doesn't give her a free pass. She needed to add a little fun to this apocalyptic mix.

Give me Kim Stanley Robinson's end-days fiction any day instead.
Posted by Pop Culture Lunch Box at 9:10 PM