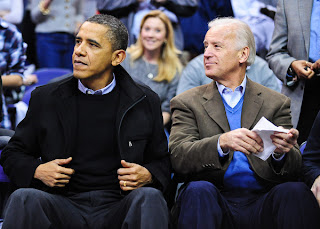 My season-ticket partner-in-crime Peter and I knew the Duke game had a good chance to be the game of the year. And although the action of the court didn't live up to the excitement of the Hoyas' 72-69 win over UConn earlier this month, it was definitely a thriller.
A blowout from the point Georgetown led 9-3 (with the Blue Devils never taking a lead), the home team went on to win 89-77, which will put the Hoyas into the top 10 come Monday.
They are looking good, and so were the dignitaries sitting just about 15 rows away from us: President Obama, Vice President Joe Biden, advisor David Axelrod, and Press Secretary Robert Gibbs. Others sprinkled around the arena included NBAer Tracy McGrady, former Hoya coach John Thompson, Pardon the Interruption star Michael Wilbon, and D.C. Mayor Adrian Fenty, not to mention CBS commentators Clark Kellogg and Vern Lundquist.
Posted by Pop Culture Lunch Box at 10:10 PM