The Proposal for the New Year 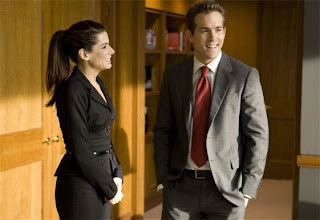 What a way to start the new year! After a late night eating Brazilian meats at Fogo de Chao downtown and partying at Morgan and Marisa's house, what better way to waste the next day than to watch part of a Jennifer Aniston marathon on Lifetime followed by a Sandra Bullock flick?

The Proposal is as formulaic as romance comedies get, yet it is surprisingly not awful. Bullock and Ryan Reynolds save a bad script with their likability and chemistry. She enters "cougar" territory by winning him over by the end (sorry if this is a spoiler, but someone would have to be an alien to not see it coming) after starting off as his cold-blooded boss at their publishing company.

The casting of Reynolds' Alaskan family is a bit of as head-scratcher. Craig T. Nelson and Mary Steenburgen are a couple of my least-favorite actors. Betty White does as much as possible with a dumb role, the scene in which she Indian dances in the snow with Bullock being Exhibit A.

But Oscar Nunez from The Office is wonderful as the deliciously awkward jack-of-all-trades (including Chippendale-like dancer) in the small Alaska town where most of the action takes place.

Reynolds, it should be noted, is building a pretty decent little repertoire, including Dick, Harold & Kumar Go to White Castle, National Lampoon's Van Wilder, and Definitely, Maybe. Should be interesting to see how he fares in the future.