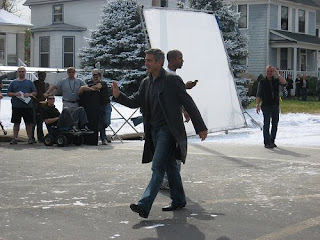 Having lived in and around the St. Louis area for all but the last 10.5 years of my life, I must make an addendum to my last post, the review of Up in the Air.

Not only was the story great, but it was fun to watch as several recognizable landmarks popped up throughout the film. There aren't many films made there in the dead-center of the country, so anytime historical anecdotes from George Clooney about Lambert Field or shots of the Cheshire Inn (right next to the world's largest Amoco sign) sneak into a movie, it's a treat for me.

Maybe in the sequel, Clooney will stop in at Imo's Pizza, Vintage Vinyl, and a Cardinals' baseball game.
Posted by Pop Culture Lunch Box at 11:26 PM