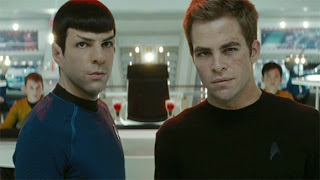 I have never been a Trekkie and have never seen any of the first 10 movies. The most I've delved in were the first few TV episodes from the 1960s. That said, I really liked those few episodes I saw. One had something to do with a monkey, I recall.

So, with not much baggage going into this 2-hour-plus endeavor, the latest installment, simply called Star Trek, is really good.

Unknowns Chris Pine as a swashbuckling Captain James T. Kirk and Zachary Quinto (Heroes and 24) as the smart and powerful Spock are excellent as dueling buddies ala Han Solo and Luke Skywalker. They both bring emotion and feeling to characters who very well could have been cold. In fact, the entire crew of the USS Enterprise wins the audience over by the end.

Eric Bana (Black Hawk Down, Funny People) plays tattoo-faced bad-guy Nero with a refreshing non-Darth Vader, normal-guy voice. And the special effects, for once in a modern movie, don't detract from the story. There are a lot of cool silent-but-still-massive explosions and interesting uses of sound (or lack thereof) for the many sci-fi violence moments.

Nicely directed by J.J. Abrams of Lost fame. And anytime you can cast Winona Ryder as an old whore, you must be doing something right.