Up in the Air Deserves Lofty Praise 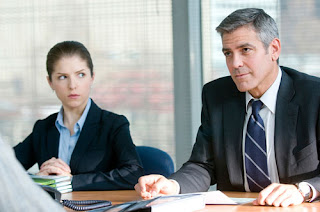 In a down economy, the last thing anybody wants to go to the movies to see is a bunch of people getting fired. Lucky for the great new film Up in the Air, George Clooney finesses us through the ordeal.

This is a film fit to our times but with Brat Pack sensibilities (back when flying was fun). Clooney lives his life in the air gathering frequent-flier perks. He loves the freedom of his lifestyle, which most people would view as soul-deadening and airport-contaminated. But when he meets the sultry-eyed Vera Farmiga (The Departed, The Boy in the Striped Pyjamas), his heart may finally have met it's match. Throw in the young hotshot Anna Kendrick as the person who could upend Clooney's entire career, and his entire worldview is shaken.

The many cameos are uniformly great, and they include Jason Bateman, Sam Elliot, Danny McBride, and The Hangover's Zach Galifianakis.

Jason Reitman is on a serious roll as perhaps the greatest director of the 2000s, with Thank You For Smoking and Juno already under his belt. Up in the Air continues this streak of catching our collective sensibilities at the right time and place, and this film will no doubt make an impression this upcoming awards season.