Update: So Yes, Mom, I Was on TV Yesterday 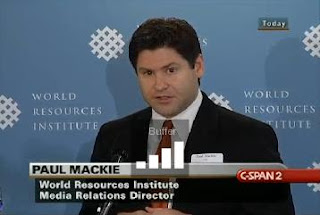 OK, so I did end up being on TV yesterday (realizing this post is mainly for my mom, but, really, which of my articles isn't for my mom).

The World Resources Institute's Environmental Stories to Watch aired on C-SPAN2 from 7 to 8 p.m. EST on Thursday and again from 4 to 5 a.m. today. It features me introducing my non-profit's president, Jonathan Lash, as he walks reporters through what they might expect to cover over the upcoming months and year.

Much of it is about post-Copenhagen climate issues, what Congress will do to pass a climate bill (if anything), and some information on the EPA, forests and Chesapeake Bay water issues.

It was probably the most successful event I've had the pleasure of organizing in my 5+ years at WRI. There were more than 80 people in the room at the National Press Club, including reporters from Politico, The Guardian (UK), Reuters, CleanSkies.tv/ABC TV, BBC World News Tonight, Bloomberg News, National Journal, Climatewire/New York Times, National Geographic, Voice of America, Agence France Press, Kyodo News, Gannett, McClatchey News, Public Radio International, and many others.

Or read a summary at Treehugger.com.

WRI's own Web site has some nifty features on the event as well.
Posted by Pop Culture Lunch Box at 12:53 PM