The Blind Side Enters My List of Top 2009 Movies 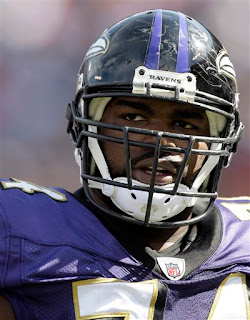 Michael Oher went from nothing to making Old Miss's honor roll twice, graduating with a degree in criminal justice, and getting drafted in the first round of the 2009 NFL draft by the Baltimore Ravens.

His story along the way is a touching one, and detailed in The Blind Side, based on a book by Michael Lewis of Moneyball fame. Sandra Bullock is said to be a front-runner for the Academy Award for best actress in her role as Leigh Anne Tuohy, the Republican socialite who took in young "Big Mike." This later results in NCAA investigations into whether Tuohy and her husband (played by a likable Tim McGraw) shaped Oher (played by an even more likable Quinton Aaron) into bringing glory to their beloved Old Miss team.

This movie has floated under the radar somewhat, but it's a quality addition to the best movies I've seen this year: Avatar, Inglourious Basterds, Julie and Julia, Drag Me to Hell, Up in the Air, Adventureland, Crazy Heart, Funny People, Bruno, Star Trek, Away We Go, and The Hangover (I still haven't seen Precious, A Single Man, Invictus, Where the Wild Things Are, Sherlock Holmes, Zombieland, The Informant!, Fantastic Mr. Fox, An Education, The Men Who Stare at Goats, State of Play, The Messenger, and The Hurt Locker).

Look for my own Academy Awards after the real ones are announced March 7.
Posted by Pop Culture Lunch Box at 1:03 AM