Crazy Heart is an Old Worn-Out Sock Worth Keeping 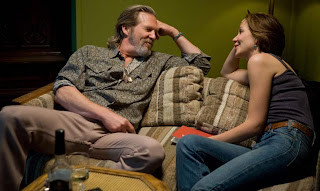 Jeff Bridges has definitely made it difficult to pick Up in the Air's George Clooney as best actor at this year's upcoming Academy Awards. My two favorite actors are up for the honor, but Crazy Heart has the weight of drama that the judges traditionally favor.

I saw it last night and loved it. A lot of people told me there wasn't much of a story, but that Bridges was phenomenal. But I didn't see it that way. Bridges, as Bad Blake, ambles through the southwest in old beat-up truck. He lives the life that anybody who ever wanted to be a rock n' roller dreams (at least sort of) about. Freedom. Peeing into the desert wind.

But Bad Blake's troubles gather throughout the movie, as his constant smoking and whiskey-drinking lead him into injuries of the body and the heart. He finds a woman in a young reporter (a blushing and lovable Maggie Gyllenhaal) who eventually leaves him over a mistake Bad makes with her young son.

Until Bridges tries to redeem and repair himself at the end, there is almost no reason to care much about his character. However, Bridges sings all the songs and they're as instantly classic as any George Jones or Merle Haggard drink-along. His "new country" competitor, played by Colin Ferrell, also does a good job of singing his own tunes. These song cycles are the moments that build a relationship between the audience and Bridges' terrific performer/miserable human persona.

By the end, you finally love Bad Blake as a person. And, like that old thermal sock that is a little worn-down but you can't get rid of because there's still snow on the ground, you love this movie.