Is Time Travel Only For Sixth Graders and Egomaniacs?

This is the third part in a series about Chuck Klosterman's new book Eating the Dinosaur.

Chuck Klosterman loved The Time Machine by H.G. Wells when he was a sixth grader. When he reread it in 2008, "it was (predictably) a wholly different novel that now seemed fixated on archaic views about labor relations and class dynamics, narrated by a protagonist who is completely unlikable."

This makes sense since Wells was often described as "an egomaniac who attacked every person and entity he encountered throughout his entire lifetime." 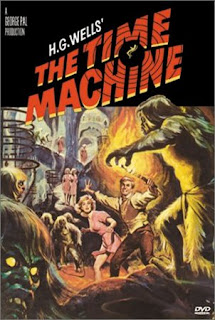 But Klosterman does give Wells credit for creating the since-popularized cliche of time travel by machine. Previously, time travel had been around in literature (including the 1733 Irish novel Memories fo the Twentieth Century, Mark Twain's A Connecticut Yankee in King Arthur's Court, and 1892's Golf in the Year 2000), but "it just sort of happened inexplicably, a person exists in one moment and they're transposed to another."

He goes on to list a litany of problems with time travel that art about time travel has often conveniently managed to avoid noting. For instance, "you also exist in the recent past," so how could there be two of you, and "before you attempted to travel back in time, you'd already know if it worked."

So maybe sci-fi time travel is a difficult subject to convincingly convey to an educated adult. It will be interesting to see if the creators of Lost can pull it off as they spiral into the final 15 episodes of the show. If this week's season premiere is any indication (which they have begun to unravel by explaining that two John Lockes can perhaps be in the same place at the same time), then viewers are in for a let-down ending to a great show.
Posted by Pop Culture Lunch Box at 11:58 PM