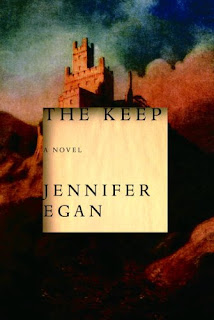 Her recent short story in the The New Yorker called "Safari" got me inspired to read more of Jennifer Egan's work. Then I recalled that she also wrote a highly memorable story for the magazine in 2007 called "Found Objects."

By this time, I was psyched to dive into the San Francisco writer's 2006 best-selling novel The Keep. It's a modern gothic tale about Danny, who leaves his troubled past in New York City to accept an invitation to work for his estranged cousin Howard, a millionaire who is building a business around a dilapidated old castle somewhere in Eastern Europe. The problems begin when phone-addicted Danny is unable to use the telecommunications devices (including a small satellite dish) that he's hauled all the way there. Danny freaks out and begins to lose his grip on reality, exemplified by a run-in with an old (or maybe young and beautiful) baroness in the castle's tower "keep," a terrifying adventure in the castle's underground tunnels, and a fall from one of the tower's windows.

It turns out this entire story is actually a piece of fiction being written by a prisoner named Ray, who is in love with Holly, his writing teacher with a dark background of her own. These stories-within-the-story are certainly creative, although I think I feel a little cheated. Danny and Howard's story is so good that I didn't want it to get swallowed up by the others.

But there is no doubt that Jennifer Egan is one of today's top storytellers. In both her short stories and The Keep, she induces mouth-panting page-turning. The Keep features the talents of Edgar Allen Poe and Stephen King's horror, Franz Kafka's gothic creepiness, and Chuck Palahniuk's modern technology and blended perceptions all wrapped into one great book.