Sarah Palin May Be Entertaining, But Is She Really Rogue? 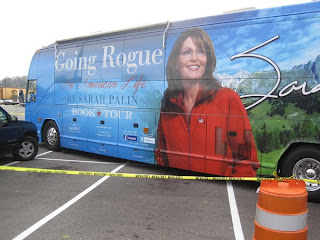 The most cheesy politicians are stuck in a catch-22. They're popular because they're cheesy. But they just make themselves look even worse when they cater to that cheese by inevitably releasing a self-help-styled autobiography.

And who could expect anything less from the fascinatingly popular Sarah Palin and her new book, Going Rogue: An American Life?

I dared to dip into this scatter-brained, fourth-grade level life story, which begins predictably with the former vice-presidential candidate's ambition to fight "'the good ol' boys' who lunched with oil company executives and cut fat-cat deals behind closed doors."

She continues: "I didn't necessarily get into government to become an ethics crusader. But it seemed that every level of government I encountered was paralyzed by the same politics-as-usual system." If we each could have a dollar for every time a politician promised to change this unfortunately eternal situation, we each could earn enough money to say the same things, run for office, and proceed to similarly get nothing accomplished.

Some moments in the book that add to her litany of cheese:

- Palin prayed that a ringing phone was her son Track calling to talk about his upcoming deployment to Iraq. But instead it was Senator John McCain offering her the role of his VP candidate. "Please, Lord, just for an hour, anything but politics," she claims to have thought as the phone rang.

- She rambles on about her passion for reading as a child, almost as if to prove that Katie Couric messed with the wrong woman when she asked Palin which newspapers she likes to read (to which she cryptically replied that she reads them "all"). Palin glosses over her affection for Jack London, who lived in the same Alaskan area as the politician's family. Her dad was "called north" by the inspiration of London's novels.

- Further proof of her talents: In third-grade, Palin won the VFW's annual flag poetry contest. Her poem was about Betsy Ross and, "years later, when I won that patriotic group's annual college scholarship, [I] was just as proud."

- When she was pulled over by a state trooper for "snow-machining" down a road, "I couldn't help wondering about [the policeman's] priorities. Looking back, maybe that was my first brush with the skewed priorities of government."

So I guess one policy to alter business-as-usual politics would include fewer police on patrol. Maybe Sarah really is pretty rogue. Here is a full list of her policy positions. I promise, this is entertaining stuff. You decide if it would change business-as-usual D.C.
Posted by Pop Culture Lunch Box at 11:49 PM