Sold! The Goods Provides a Slight But Funny Diversion 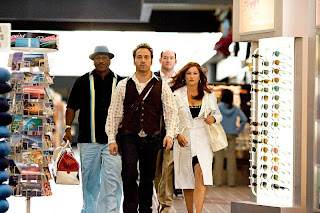 The pure idiocy of The Goods: Live Hard, Sell Hard ensures that nobody is going to take this film too seriously. And because of that, it's actually pretty enjoyable.

Jeremy Piven plays the leader of a group of hired guns who get called in to sell cars when dealerships are in dire straits. This core (Ving Rhames, David Koechner, and Kathryn Hahn) is very funny and has strong chemistry. They are, of course, successful in saving the day. They also foil a cross-town competitor, whose arrested-development son is played by the always-hilarious Ed Helms, aspiring to be part of the next great boy band.

Ken Jeong and Charles Napier are also wacky as fellow salesmen who once might have been rivals in a world war (there is plenty of delusional behavior). And Will Ferrell makes a cameo in the funniest scene, which involves a failed parachute, lots of sex toys, and the pivotal plot point.

That plot is what can only be described as Ferrell/Adam Sandler formulaic, but The Goods is a minor silly comedy that is well worth watching for people who enjoy that type of juvenile entertainment.