Why Bob Marley Stayed in the Hell of Trenchtown 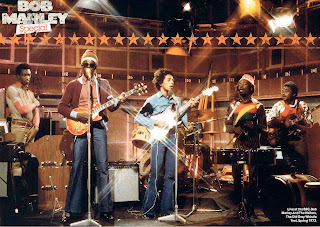 This is the tenth installment in a series about a book I'm reading called Stories Done, which is a great collection of tales of excess from counter-culture leaders.

Bob Marley, nicknamed "Tuff Gong," loved running with the Rude Boys while growing up in Trenchtown, in Kingston, Jamaica. But it wasn't because he wanted to work for these tough thugs.

"Marley (pictured, in blue shirt) found qualities of ruthless honesty, courage and rough beauty in the tenement-yard community, and he didn't necessarily want to transcend or escape it. He wanted to describe its reality and to speak for its populace."

When he briefly moved to Delaware in 1966, he "didn't like the pace of life there, nor the circumscribed job opportunities available to black men." Much of his thinking along these lines was shaped by Jamaican Marcus Garvey, who espoused the Ethiopian "living god" Haile Selassie's encouragement for "blacks to look at their African heritage and to create their own destinies apart from the ones imposed on them by America and by European colonialism."

Marley stayed true to his Rastafari beliefs, even dying because the religion did not allow medical help, despite cancer ravaging his body. He was a vegetarian because meat was not allowed. His late albums all had titles with religious imagery: Exodus, Kaya, Babylon, Uprising. These were all central themes that the singer needed to explore by staying in the place he knew, and which greatly helped give Jamaica a voice on the world's cultural stage.