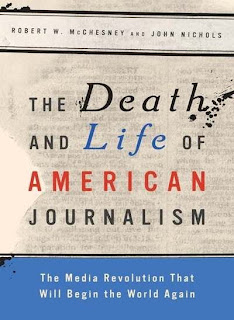 Senator John Kerry (D-Mass.) convened a hearing in Spring 2009 on the crisis of the current media landscape. And while it's encouraging that there are early signs of a political awakening, the loss of sheer numbers of reporters, enterprising investigation, and deep journalistic thought has clearly entered crisis mode.

"For the first time in modern American history, it is entirely plausible that we will not have even minimally sufficient resources dedicated to reporting and editing the news and distributing the information and informed analysis that citizens require."

These are the words near the opening of a new book by Robert McChesney, host of the Media Matters radio show, and John Nichols, The Nation's D.C. reporter, two writers I've respected since reading their media-theory books in graduate school and seen present their reformist theories a few years ago at Busboys and Poets.

But despite what sounds like a plea for the nostalgia of ink-stained newspapers, The Death and Life of American Journalism: The Media Revolution That Will Begin the World Again makes the call for government subsidies to save the media.

Interestingly, "the entire press system of the U.S. was built on a foundation of massive federal postal and printing subsidies that were provided to newspapers during the many decades that forged the American experiment. The purpose of the subsidies was not to enrich publishers but to broaden the marketplace of ideas and to provide a journalistic check and balance on those who might threaten fragile freedoms."

The authors give the example of public universities drawing subsidies without political interference of academic freedoms. They rightfully blame journalism's problems on media owners, with their emphasis on entertainment over civic value. Thankfully, they don't blame a simple scapegoat like the Internet.

Subsidies is certainly something that would be interesting to explore. With health care, global warming, wars and the obstructionist partisan bickerings of Congress on President Obama's plate, it's probably something that will unfortunately have to wait. Good thing for my blog, eh?
Posted by Pop Culture Lunch Box at 12:05 AM