The Muddy Mess of Clinton Vs. Starr 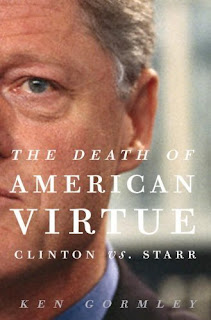 Further, Clinton and many others thought Starr ended up being far more voyeuristic than Flynt, with his "minute description of every sordid little detail" between Clinton and Monica Lewinsky. As late as 2004, Clinton was remarkably calm in conversations, but "when Starr's name was mentioned, his eyes flashed with anger" and his face reddened. Clinton said, "This fellow just thinks he's doing the Lord's work. And he's got the power and he's going to use it."

And it all makes for a thrillingly intriguing read. There are juicy details on Whitewater ringleader Jim McDougal eventually dying "naked on a [prison] floor begging for his medicine and begging the Office of the Independent Counsel to help him after they promised to put him in a medical facility." Yet Gormley stays safely away from myths, noting that Bill and Hillary Clinton had nothing to do with McDougal's death, despite some loud cries otherwise.

The Arkansas Whitewater development, like the relatively tattered remains of many of its key players, ended up being located on the wrong side of the river, difficult to access, and a muddy headache where nobody wanted to live.
Posted by Pop Culture Lunch Box at 11:48 PM