Precious: The Urban Antidote to the Suburban Blind Side 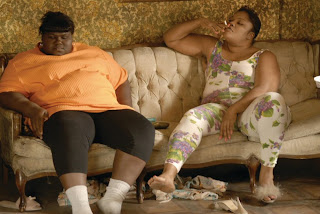 Precious: Based on the Novel "Push" by Sapphire is the second consecutive movie I've seen about a poor African-American kid who is mercilessly abused but goes on to lead a relatively happy existence.

And it's very good, with the benefit of being a lot less Hollywood syrupy than The Blind Side. Mo'Nique is pure evil as the domineering and extremely abusive mother of 16-year-old Precious. She chucks her daughter's babies aside like old rags. Babies that are the product of her boyfriend's rapes of her daughter! Then everyone gets HIV.

Yeah, fun stuff. The supposedly uplifting moments of the film examine the day-dreaming Precious imagining that her high-school teacher is in love with her and that she is a famous pop singer. A lot of these moments seem to cater to the American Idol masses, and they aren't very interesting.

The great thing about the movie is the characterization. Precious and her friends are fascinating, and singers Mariah Carey and Lenny Kravitz do nice jobs in supporting roles as a social worker and male nurse.

It will be interesting to see how many prizes Precious claims at the Academy Awards, where it's nominated in six major categories. My guess is that nothing about the movie is major enough other than Mo'Nique's face-melting scene at the end when she rationalizes her life to social worker Carey. She should be a lock for best supporting actress, if only for these five minutes.