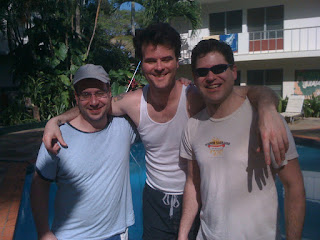 Our Dominican Republic vacation got off to a bang Sunday when we arrived at Puerta Plata airport and made our way in the little red rental car down the coastal Highway 5 through zipping and zinging motorbikes and cars driving on all sides of the road.

Tim did an effortless job of driving while Dan and I rode along, unfazed and amused at the Frogger-like activity.

After checking in at our cozy and basic Tropix Hotel (that's the three of us in the picture by the pool), and being warmly welcomed by Carl, a New Yorker friend of the owners, we made a beeline for the nearby Sosua beach.

We had arrived with enough time left in the day to sit on beachchairs, drink juice from a coconut, eat fried cheese and fresh oysters, swim on the reef of the ocean floor, and watch a beautiful sunset over a faraway mountain.

After that, we grabbed a delicious late dinner for about $10 total at a trailer on the side of the road. We dined with a tall local named Robert, who shared something that was similar to a pork lasagna with us. And we ordered some sort of tacos and chicken paninis.

Then we hit the nightlife, enjoying the local liquor called Mama Juana, which is made from bark and some sort of fruity juice.

The prostitution is rampant and it's pretty saddening. Mostly it was old German men hooking up with extremely young (14 to 18?) Dominican girls. Somewhat oddly, most of the propositioning (which wasn't too overwhelming) went to Dan. He was also offered Viagra on the street. There was a young twitchy girl sitting at the table next to us at one bar who went home with an ugly, pony-tailed old German man with huge gout-ravaged ankles.

Breakfast at the hotel pool was a much prettier scene this morning. Now we're off to explore the beaches to the east.
Posted by Pop Culture Lunch Box at 10:34 AM