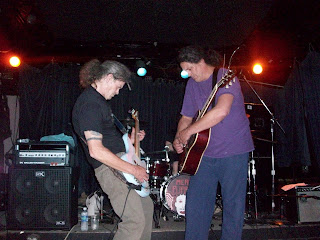 Because there are so many great blogs out there like Pop Culture Lunch Box, this is a new regular feature that will give these unheralded journalism enterprises a little love.
From the wonderful and "barely coherent" ramblings of the Minnesota-based blog Lost Forest After Dark, it's good to see that the Meat Puppets (celebrating 30 years as a band!) are still a force of fun lunacy to be contended with on the world's rock stage.

From a review of the band's recent show at the 400 Bar, we learn that the desert-fried 80s legends "can still throw down." Along with their many classics off great albums like Up on the Sun and Forbidden Places, the Puppets threw in a handful of covers, including the Christian hymn "How Great Thou Art" (also later covered by Elvis) and the gospel tune "Just a Closer Walk with Thee."

And to really localize the show, former Husker Du bassist Greg Norton and his handlebar mustache made an appearance on the The Beatles' "Tomorrow Never Knows."