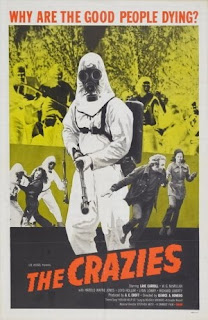 The new horror flick The Crazies looked intriguing, so I decided to check out the 1973 original. Well, they're going to have to do a doozy of a job with the remake to save this stinker from the heap.

The movie is, in all fairness, kind of fixating. But with the expectations of it being a George Romero film (writer and director of Night of the Living Dead, Dawn of the Dead, and The Silence of the Lambs), this one feels mostly like a misstep.

For a film called The Crazies, there needs to be lots of psychological mayhem, and there is hardly any. There is a cool ex-Green Beret who battles his way through a Pennsylvania town where the water supply has been badly contaminated by a military mistake. Residents are rounded up amid numerous shoot-outs against B-movie (or maybe C-movie) stormtroopers.

The anti-climactic ending is just another groan-inducing moment. Cinema goers stayed away when this stinker first hit the movies, and you should do the same thing now.