A Garden State Version of Wilco 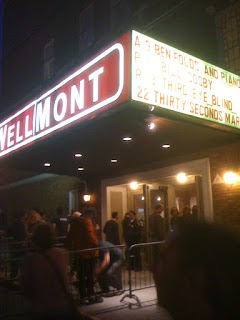 It seems like the only band Rachel and I have been seeing lately is Wilco. Not a terribly bad thing since the Chicago-via-Belleville, Illinois band is our favorite current group.

This time we traveled to Montclair, New Jersey to catch them at the fairly new Wellmont Theater, a place similar to DC's 9:30 Club in that it's a converted old theater that holds about 2,500 people.

After meeting up with my brother's friends Rick and Debbie, we left Jackson with Debbie and their kids and headed with Rick to the theater. The sound was not perfect (a bit of an echo) but the 3+-hour set pulled out all the right stops, with two great Big Star covers highlighting the end of the night. It was very fitting for the band to play such loud, power pop versions of "In the Street (That 70's Show theme)" and "Thank You Friends." It was also touching since Big Star leader Alex Chilton suddenly passed away last month.

The other highlights were too many to mention, and the acoustic set in the middle was a nice touch. The (mostly) full review and set list are here.

We finished the night by walking from the concert with Rachel's friends Jon and Katie back to their apartment a few blocks away to catch up. Then we headed back to Rick and Debbie's house to grab Jackson, who of course had stayed up too late having fun with their 11-year-old daughter Rachel.
Posted by Pop Culture Lunch Box at 1:38 PM