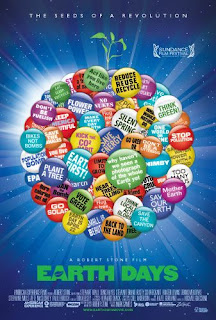 I'm now writing a weekly column on the environment for the exciting Web start-up NetGreen News. You can see my first blog post directly here. Also check out the site's cool home page and Twitter feed.

Sting, Jimmy Cliff, and Passion Pit will lead the musical portion of this year's 40th anniversary of Earth Day on the Mall in Washington DC. Although that should be a pretty good show, and potentially an historic event, whether or not I attend may depend on what my 2-year-old son wants to do that day.

But hopefully others will feel the passion for Mother Earth that was evident all those years ago, when Harvard grad student Dennis Hayes led the beginning of a massive movement to make the first Earth Day, in 1970, a raging success. It led to the first environmental policies in the U.S., cleaner skies over Manhattan, and a reduction in the use of hazardous agricultural chemicals, as detailed in Rachel Carson's Silent Spring.

So even if I don't make it to the rally on the Mall on Sunday (Earth Day is actually tomorrow, Thursday), at least I had my own little celebration by watching a captivating two-hour documentary on PBS entitled Earth Days. It features the story of the environmental movement and is narrated by major players like Hayes, former Secretary of the Interior Stewart Udall, and former Merry Prankster and Whole Earth Catalog founder Stewart Brand.

The real star of this film, however, is the creepy archival footage. After World War II, Americans set out on a destructive course of consumerism. Everyone wanted to get rich or at least fool their neighbors into thinking they were. The way most people set about doing this was by eating space-age TV dinners, dousing their kids in chemical repellents, buying automobiles to use on the massive new interstates, adding fallout shelters to their basements, and loading up their refrigerators as full as possible. All the while, people in this footage have smiles glued a mile wide on their faces. Our oblivious downward spiral into creating this greenhouse mess for ourselves is shocking to see, even if we've already been told the story of the environmental movement numerous times.

The film also succeeds at asking what will become of the environmental movement. It made lots of missteps along the way and has often found itself at odds with common people and big companies that both want to protect their livelihoods.

Definitely a thought-provoking and quality film that just about anybody should enjoy.