This is the fourth part in a series about Chuck Klosterman's new book Eating the Dinosaur.

Klosterman taps into why Alfred Hitchcock's movies were so brilliant. The director was a reality-show producer long before the era of reality TV. Vertigo and Rear Window relied on voyeurism to build suspense and characters we cared about. But Hitchcock was a genius because he didn't tell us too much. He left some of the mystery in voyeurism. 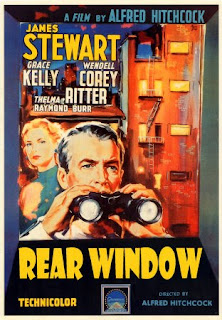 That's why Klosterman was able to stay intrigued by the woman who lived across from him in Fargo, North Dakota. Their windows faced each other so that when they were both watching TV, they were essentially looking right at each other. Sometimes Klosterman would be watching reality TV while real reality unfolded just beyond his TV and out the window across the way.

He writes: "My boring neighbor felt infinitely more watchable, regardless of how little she did. So why was that? I think it was because I knew less. There was always the possibility she might do everything."

This might explain why I stopped watching Survivor after about two seasons. I never really went back to any reality TV after that. I had seen all I needed to see of an entertainment - "voyeurism" - that was processed through a network filter. "Voyeurism's titillation comes from the utter chaos of noncontextual information. It's closer to a narrative that ignores all the conventional rules of storytelling; it's more [David] Lynchian than Hitchcockian."

In the end, voyeurism can partly take us into another person's world. But even more, it could make us remember or realize that we ourselves are so very disconnected to the rest of the world, even the people who may be only a few feet from our living room windows.