Sharks Can Be Downright Unfriendly 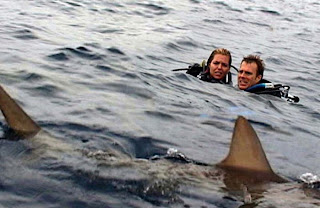 Telling the true story of a couple left behind by their scuba tour boat at the Great Barrier Reef, Open Water moves the story to the Caribbean and is a must-see for anyone as compelled by the mystery of sharks as I am.

Unknown actors Daniel Travis and Blanchard Ryan, a poor-man's Greg Kinnear and Charlize Theron, do a great job as an American couple trying to work out their problems by leaving their busy careers behind for a short vacation. Apparently, the two spent many hours floating in the ocean with real sharks during the filming of this 2004 indie film.

Open Water is short, punchy, suspenseful, and heart-breaking. The low-budget camerawork is a little unsettling at first, but when the couple enters the water, it is perfectly fitting and provides many mesmerizing underwater and half-underwater angles.

People who don't like to think of the terrifying beasts that sometimes lurk just beneath our swimming feet will not want to see this disturbing movie. Fans of Jaws absolutely can't avoid it any longer.