What Should We Do About Oil Spills? 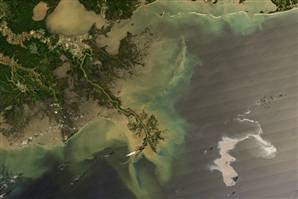 I'm now writing a weekly column on the environment for the exciting media start-up NetGreen News. You can see all my columns (this is only my second) here.

Over the past week, nearly 600,000 gallons of oil (pictured) have flowed into the Gulf of Mexico from BP's Deepwater Horizon semi-submersible oil rig.

Even though that sounds bad, and the photos and videos look awful, it is a drop in the bucket compared to the worst spills in history. Considering that this spill could eventually spread to the size of Rhode Island, that gives us an idea of just how bad other spills have been.

Five-hundred and twenty million gallons seeped into the Arab Gulf when Iraqi troops dumped oil to keep U.S. Marines from attacking by sea. That was the worst spill in history, and there have been another 32 - get that, 32 - spills before one gets to the famed 1989 Exxon Valdez in the rankings! (The Exxon Valdez spilled nearly 11 million gallons in Alaska.)

So what can we do about the continuous flow of oil into our water? It surely isn't good for anyone. The Deepwater Horizon spill will cripple the amount of oysters and shrimp we have to eat and will reduce tourism revenue in Louisiana, Alabama, Mississippi, and Florida.

It will be interesting to see how the spill (along with the recent catastrophe on the sensitive and endangered Great Barrier Reef) affects the Obama Administration's plans to expand domestic offshore drilling. The images we're soon to see of controlled burns on the gulf will be reminiscent of the bad old days, before we had an Earth Day, when the Cuyahoga River cooked outside of Cleveland and oil poured into a bird habitat off the coast of Santa Barbara, California.

Let's hope the news coverage of these ecological disasters, which keep happening with little repercussions for the oil companies (unless you consider the further destruction of their images), will result in stricter prevention policies both domestically and internationally. The best time for Obama and EPA Administrator Lisa Jackson to combat future spills would be now, while the public is attentive and crews set the gulf aflame, puncture holes in the destroyed well, and build a dome to capture oil and pump it to ships on the water's surface.
Posted by Pop Culture Lunch Box at 5:11 PM