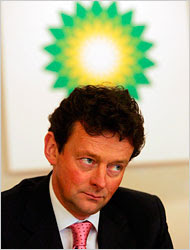 Here's my weekly column for the exciting media start-up NetGreen News. You can see all my columns here.

It was shocking to see BP’s chief executive, Tony Hayward, utter this quote in last weekend’s Financial Times: “It was not our accident, but it is our responsibility to clean it up.”

Hayward blames Transocean, the operator of the rig, for causing the release of an estimated 1.6 million gallons of oil into the Gulf of Mexico since Earth Day nearly two weeks ago. (The 1989 Exxon Valdez accident spilled 11 million gallons off the coast of Alaska.)

And while it truly may have been a spill that was out of BP’s hands, the way it was communicated to the world was terrible. The company’s obvious lack of preparedness for such a spill is mind-boggling, because while the spill may eventually be contained at approximately $6 million per day, the reputational damage to a company that was once “Beyond Petroleum” very likely could be devastating.

British Petroleum’s rebranding nearly a decade ago has long been held as an exemplary study in transformative communications strategies, taking BP from a disrupter of natural resources to a protector of the environment. The Gulf oil spill could end any claim to “Beyond Petroleum,”especially after the 2005 safety violations and 15 employee deaths at its Texas City, Texas refinery explosion and the 2006 corroded and leaking pipelines that shut down its major Prudhoe Bay, Alaska oil field.

There may be time for BP to reclaim some control over the current situation, but it will need to stop issuing comments that deflect the blame. It will also need to do more than launch a Web site where people can voice concerns and post a few videos describing how hard the company is working on the ground.

Those are absolutely necessary and good steps. But Hayward has still missed many opportunities and he must get aggressive. He needs to issue a contingency plan to local residents and state officials who could soon inundate BP with lawsuits. The fact that BP offered $5,000 settlements to residents for waiving their rights to later sue for damages shows that the company was advised by lawyers but not public-relations experts.

There also needs to be a flood of pictures, videos, social media, and other storytelling devices being issued from BP to the media and the public. For now, photos of the destruction to nature and wildlife are telling the story throughout endless news cycles, and that is not working in BP’s favor. The public needs to see the clean-up efforts of everyday American workers.

Hayward is also allegedly keeping a tight grip on the journalist credentials being allowed to enter the clean-up zone or to get a view from within BP’s company operations. He could at least begin having regular hourly, or several times each day, press briefings and photo opportunities. Remember how Rudy Giuliani enhanced his image as a hero during the worst of times after the September 11 attacks?

The Obama administration is not exactly doing any favors for BP’s image either. BP Chief Operating Officer Doug Shuttles told Matt Lauer on NBC’s Today Show that “we’ll take help wherever we can get it,” which again showed that BP had lost control and really needed the federal government’s help. Meanwhile, Obama apparently thought the problem would go away on its own. His lack of public inattentiveness is eerily similar to George W. Bush’s early public-relations missteps during 9/11 and Hurricane Katrina.

Obama clearly wants to keep the focus on BP’s slow response rather than his own. At least he has reversed his plan to allow for offshore drilling on several U.S. coastlines, and Congress has scheduled a hearing on the spill for May 12.