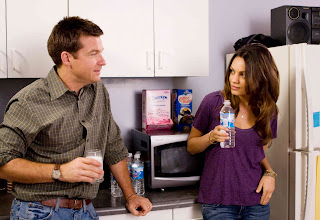 Director and animator Mike Judge would always be legendary even if his only creative work were Office Space. So Extract is really just icing on the cake.

Jason Bateman is legendary comedy gold for Arrested Development, arguably the greatest sitcom ever. So this movie is likewise icing for the former teen idol who made it big in the 1980s with roles in TV shows like Little House on the Prairie, Silver Spoons, and Valerie.

In Extract, Bateman continues his winsome streak as the founder and owner of a vanilla extract company. He sets out to fix all the horribly wrong things about his life, and one can't help but cheer for the guy.

Ben Affleck is hilarious as his bartender friend (in a Marriott sports bar) who is full of endlessly bad advice. Mila Kunis is her usual adorable self as the crook who sets out to bring his company down. SNL's wacky Kristen Wiig is perhaps a bit underused and a bit too lacking-in-wacky as Bateman's sweatpants-wearing wife, but she's still likable. And Gene Simmons of Kiss, Dustin Milligan (formerly Ethan on 90210), and David Koechner as boring neighbor Nathan each play perfectly dumb supporting roles.

This came in as a late contender in December as one of the best comedy movies of 2009.