Sea Wolf Brings Its Chomps to Rock and Roll Hotel 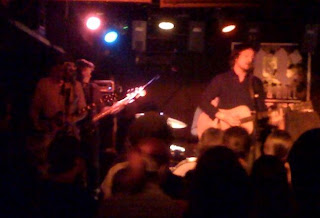 It's one of those "small world" stories. Rachel and I went on honeymoon in Tanzania and ran into the same couple over and over again on the safari leg. Aaron and Jill from Los Angeles were also honeymooning. We got to talking about music and how we were both in indie-rock bands, and I had even heard of Aaron's band, Irving.

Great band, and they even stayed at our house a few years ago while touring in DC with Voxtrot. So it was nice that Irving's former bassist, Alex Brown Church, remembered me last night after his band Sea Wolf's excellent show at the Rock and Roll Hotel.

Sea Wolf's current lineup includes cello and keyboards, with lots of fun and pretty percussion, that adds a creative and original sound to their acoustic guitar, lead guitar, bass, and drums brand of singer-songwriting. With more of a country twang (think Matt Pond PA meets Wilco) than psych-poppers Irving, this is a band with a large sound that has outgrown what feels like a somewhat constricted space in the Rock N' Roll Hotel (although I love the upstairs funhouse bar, and sat mesmerized on a dirty couch for several minutes with my friend Peter discussing the artistry of a photo of Richard Nixon saluting the troops while boarding Air Force One, but with the head of Gene Simmons from Kiss implanted where Tricky Dick's head was supposed to be). 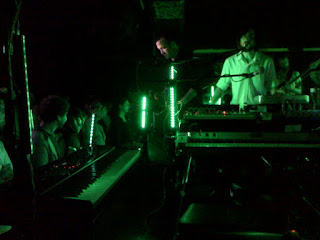 Sea Wolf has already had success, with it's 2007 debut hitting No. 24 on the Billboard chart, supplying a song for an audiobook by Augusten Burroughs, and contributing a song to popular teen movie New Moon.

The crowd started to thin out for The Album Leaf, a San Diego band with a Chicago jazzy post-rock sound, ala Tortoise and The Sea and Cake. It was an impressive show that I really enjoyed, although my one complaint (and what appears to be acceptance on the part of its young fanbase) is that many of the group's songs are ridiculously similar.
Posted by Pop Culture Lunch Box at 11:22 AM